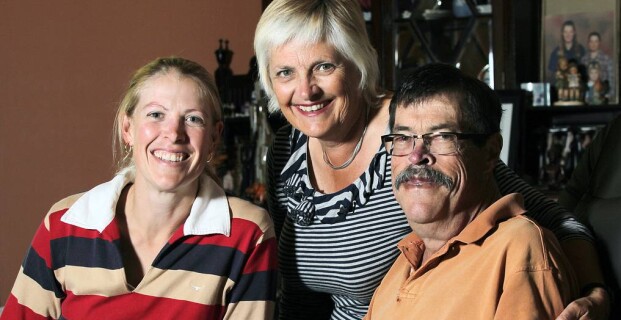 TIM and Helen Grills have finally been made life members of the Albury-Holbrook Polocrosse Club but it took some doing according to club secretary, and their daughter, Bec Cardile.

“We have had it planned for some time, before Christmas in fact, and we wanted the presentation to coincide with a major event,” Mrs Cardile said.

“But Dad has had some major health issues in recent years and it was difficult for him to get to some events.

“Even this time we thought he might not get there, because he had only got out of hospital four days before.

“But he did and the formal presentation to Mum and Dad was made by former president Gordon Shaw.”

Mrs Cardile said it was an emotional moment, and not just for the family.

“I wish my sisters Kate, Gabby and Sarah had have been able to be there, but it just was not possible,” she said.

“We had the ceremony at the beginning of the presentations on Sunday for the junior championships and the NSW Club Championships, at the Albury-Wodonga Equestrian Centre.

“Dad had to sit in his car but he could see everyone and most people in the crowd of about 500 could see him acknowledge the award; although he was unable to speak.

“Dad is well-known in polocrosse circles right across Australia and many people were aware of his challenges.

“You could have heard a pin drop, it was amazing.”

It was both an emotional and surprising experience for Mrs Grills, who had been asked to get her husband to the centre for the presentation, without him twigging to what was happening.

“I don’t ride myself but I enjoy going along and watching the sport, seeing other kids come through and helping out and supporting the club — which we’ve been around for about 26 years — whenever I have been able to.

“You don’t do it for the recognition but it is always nice when it does happen.

“My children have done well in the sport, including Gabby having been part of the Australian junior team and Sarah making the state team.

“And the sport has been very good in keeping in touch with our extended family, many of who are also involved in the sport.”

Mr Grills said the award was definitely a surprise for him.

“It certainly wasn’t on top of my priority list at the time,” he said.

“But it was a very emotional moment and a very proud one to be recognised for something I had worked hard at; the polocrosse club has been my “other life”.

“I take great pride in my part in developing the polocrosse facilities at the equestrian centre.”

Mr Grills, better known as “Griller” in most circles, agreed with his wife that polocrosse had been terrific for their family.

“We’ve travelled around Australia, following the sport,” he said.

“And there is no better way to teach a child responsibility than to put them in charge of a living animal.

“So to see Bec step up and take over as secretary is a wonderful thing — although I always knew she would put her hand up take on responsibility.”
The Border Mail
Mick McGlone, May 4 2014
http://www.bordermail.com.au/story/1477578/peers-celebrate-as-helen-tim-named-life-members/