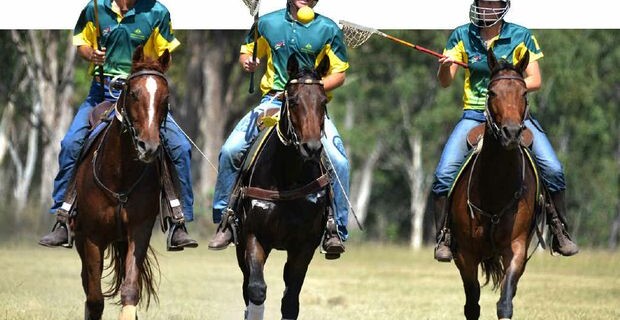 THE Grills trio from the Albury Holbrook Polocrosse Club are in Warwick to fine-tune their form for the 2015 World Cup in South Africa.

They play their first game of the weekend with the Australian team at 5pm today at Morgan Park against an Australian development team.

Talk about aiming to retain their places in the team for the 2019 World Cup at Morgan Park is music to the ears of siblings Lucy and Jim Grills, and first cousin Abbott Grills.

But Abbott isn’t getting carried away with hopes about 2019.

“We have got to win the cup back first from South Africa and then defend it on home soil in four years’ time,” he said. “The South Africans will be tough in South Africa.”

Australia won the first two cups in Warwick in 2003 and 2007 before South Africa won in the United Kingdom in 2011.

Jim Grills will turn 21 the night before the World Cup final this year in South Africa and vows to leave the celebrations until the following day.

He will have 30 for starters for his 21st, the number of family members travelling to this year’s World Cup.

In the next four years, he will be aiming to make the team for a second World Cup at the same time as striving for an AFL contract.

Currently he plays for Albury Tigers in the Ovens and Murray competition and hopes to get a chance in the top South Australian competition next season.

He said the chance of injury crossed his mind in the cup run-up but that AFL helped his fitness.

At age 22, Lucy will play in her first World Cup this year after debuting in open polocrosse for the Aussie women last year in Western Australia. Both Lucy and Jim won best player awards in two intermediate series for Australia against Ireland at Cunningham and Warwick grounds in 2013.

She remembers watching Jane Cooper play for Australia in the 2003 World Cup in Warwick and now finds herself in a team captained by Cooper. “It is good to have some experienced players in the team,” she said.

Play in the Barastoc Interstate Series starts at 10am today with Shell Cup polocrosse tomorrow and Sunday.