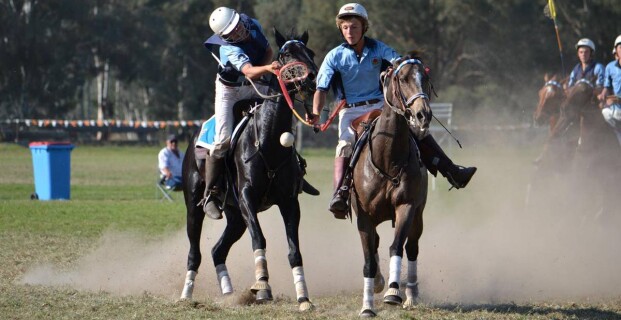 Rhys Mortimer from Cobargo is taking a bounce while Jock Grills from Guyra is laying a hit in the final of the Australian junior classic.

Around 70 teams travelled to the Albury-Wodonga equestrian centre to compete in the Albury Holbrook polocrosse carnival last weekend.

The sub junior classic is a competition for under 12 years and there were four teams in that competition from NSW, VIC and QLD.

Some of the young players parents also competed over the weekend in the the club tournament with Jugiong winning the mens A grade competition.

Before the competition the club hosted a two day training clinic on Wednesday and Thursday with 165 attending, 52 of these being under 12 years old.

Horsemanship coaches Scott Keogh from Qld and Paul Spears and Deb Wilson both from NSW also trained the kids over the two days along with personal trainer Margot Pitzen from Holbrook who took the physical fitness sessions.

President of the Albury Holbrook Polocrosse club Liam Cardile was pleased with the weekend.

“It was a successful weekend; the kids enjoyed the clinic which ran just before the carnival,” Mr Cardile said.